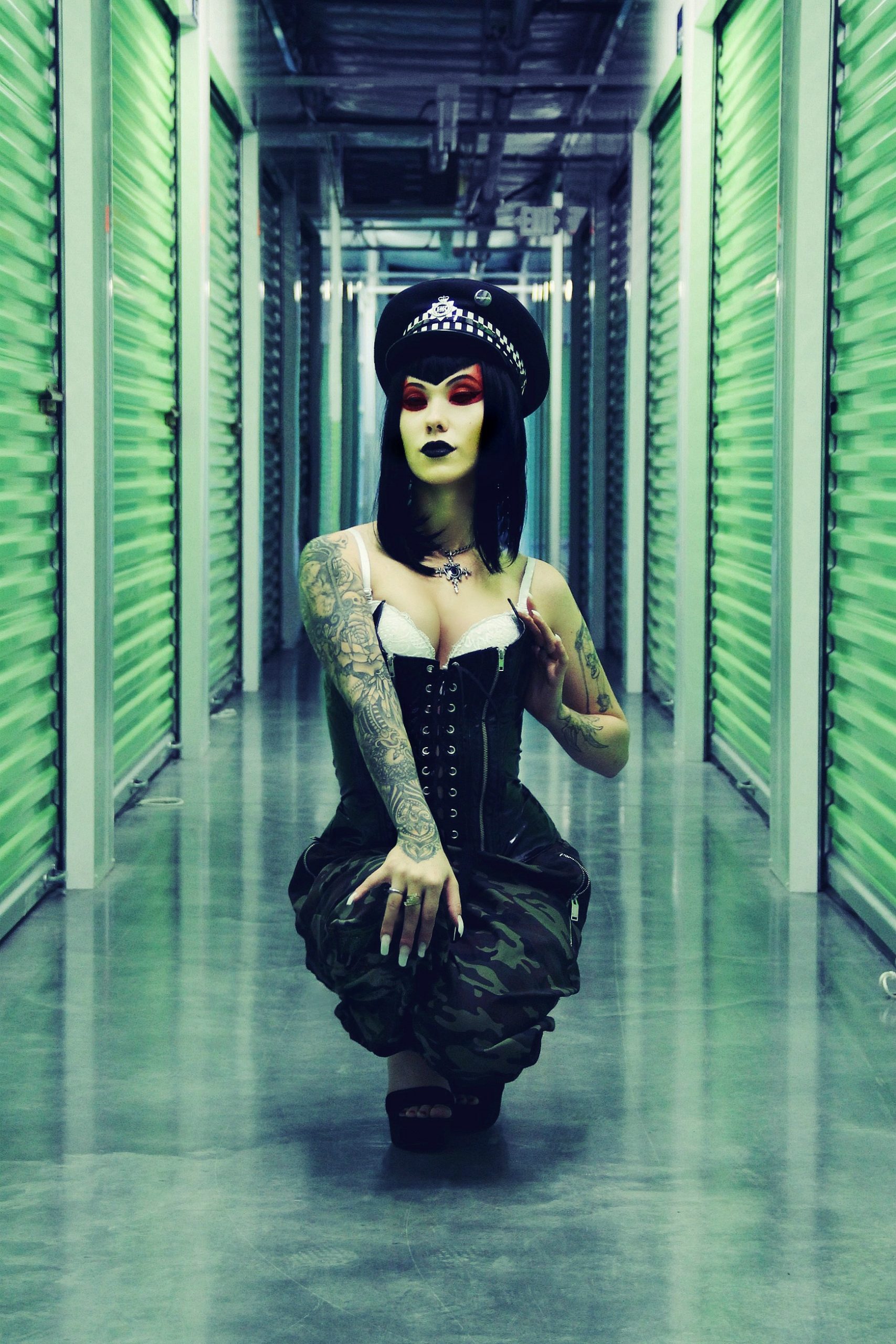 Co-edited with: Rae of Calypsa Agency

Demina ‘Dia’ Diabla, formerly known as Kiki DeVille, wears many hats — and a lot of them are couture. As part of our #BassBabe Series highlighting women in the electronic music industry, we interviewed the multi-faceted powerhouse who co-founded Calypsa Agency, runs her own illustration brand, and directs performances for a prominent Burning Man camp.

In this interview, Dia talks about coming up in the industry, making radical boundary-pushing art while giving back to her community, and the future of the west coast bass scene. We hope you enjoy this dive into Dia’s world as much as we did… 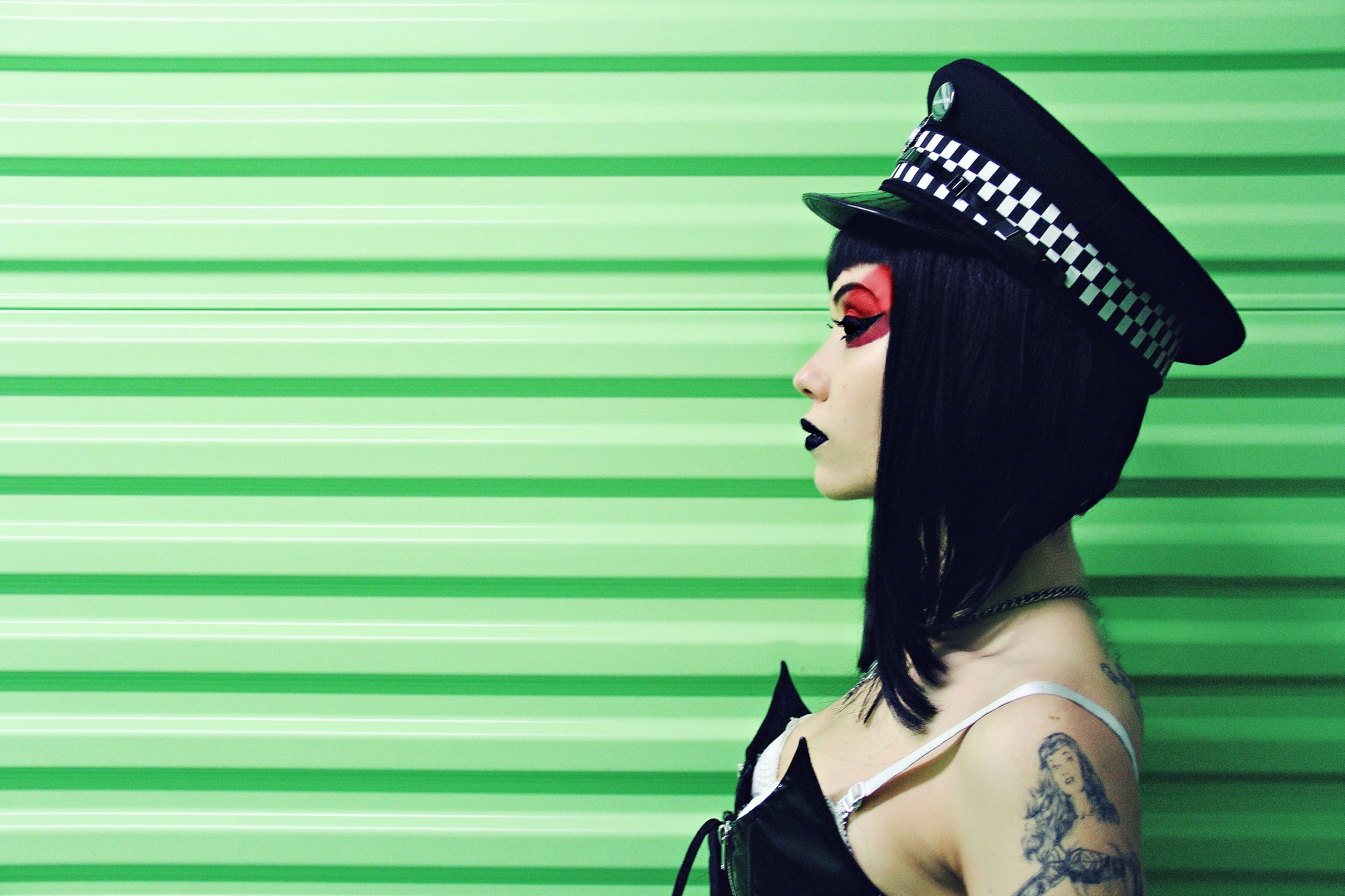 MalLabel: We’ve noticed a recent name change! Can you update us?

Demina ‘Dia’ Diabla: Kiki DeVille is a persona I have been using since I was 14 years old. A lot of people think they know who Kiki is, but Kiki hasn’t been me for quite some time. Working deep in the underground, my titles have changed over the course of a creative evolution. Having gone by Demina ‘DIA’ Diabla for over a year now outside of media, I’m taking this opportunity to publicly note the name change. Long story short, If Kiki was Magikarp, Dia is Gyarados 😉

MalLabel: You wear SO many hats! Performer and Co-founder of Calypsa; Performance Art Director for Camp Questionmark and Emissions; Artist and Illustrator for your brand, Squeeki; Returning performer at Shambhala and Bass Coast. Can you give us an exhaustive list of everything you do?

MalLabel: Do you think that versatility is a necessary skill in the music and performance industry? Is diversification particularly useful for female[identified people]s to experience success in this industry?

Dia: I would credit a lot of success to being a multifaceted artist. Versatility is what distinguishes Calypsa as a creative agency and we’re humbled to work with such diverse artists of all trades and backgrounds, regardless of gender identity.

MalLabel: Let’s go back to the beginning – how did you get your start in the dance music scene? When did you start performing, when did you fall in love with bass music, and how did those early experiences evolve into where you are today?

Dia: Before high school I was into DrumNBass/ Psytrance. At all-age raves, where it was predominantly happy hardcore and techno, I found myself listening to liquid D&B and TOOL in my headphones. Having been really into Hip-Hop as the years progressed, getting into UK Dubstep felt like a mix of the two communities, while a lot of my peers got into big room house and mainstream trance. My passions for performance and the underground music scene is what really propelled my career as a creative; as time went on I became more interested in curating the experiences like the ones that I still cherish. Having been involved in performance arts at a very young age, I gained a lot of exposure to different subcultures. From growing up in the Heavy Metal community with my parents, to attending raves and the hardcore shows of my generation — I had access to diverse perspectives and connections. At 18 I started my first business doing digital pin up photography– giving me the chance to work with set building, styling/wardrobe, and editing. That pushed me to nightlife photography. My first gig was with Gladkill and G Jones in a dive bar with maybe 75 people? My career really jump-started after being put on the spot to dance at a packed out party one night, and I started dancing as a means to consistently make a living. Where I grew up nothing was ever handed to me, which had always fueled my ambitions and strong work ethic. By combining my passion for performance with my determination to make a better life for myself, I realized this was my calling as an independent artist. From there, I held leadership as Performance Director with Foundation Nightclub, of USC Events. I left them to be Performance Director at Camp Questionmark – Burning Man’s leading bass music sound camp – and their annual festival, Emissions West Coast Bass Culture. Questionmark was the first organization to give me 1000% creative freedom, and that freedom pushed me forward to perform internationally for events like Shambhala Music Festival and Bass Coast. My ambitions for creative innovation are never-ending, and this is most definitely just the beginning. 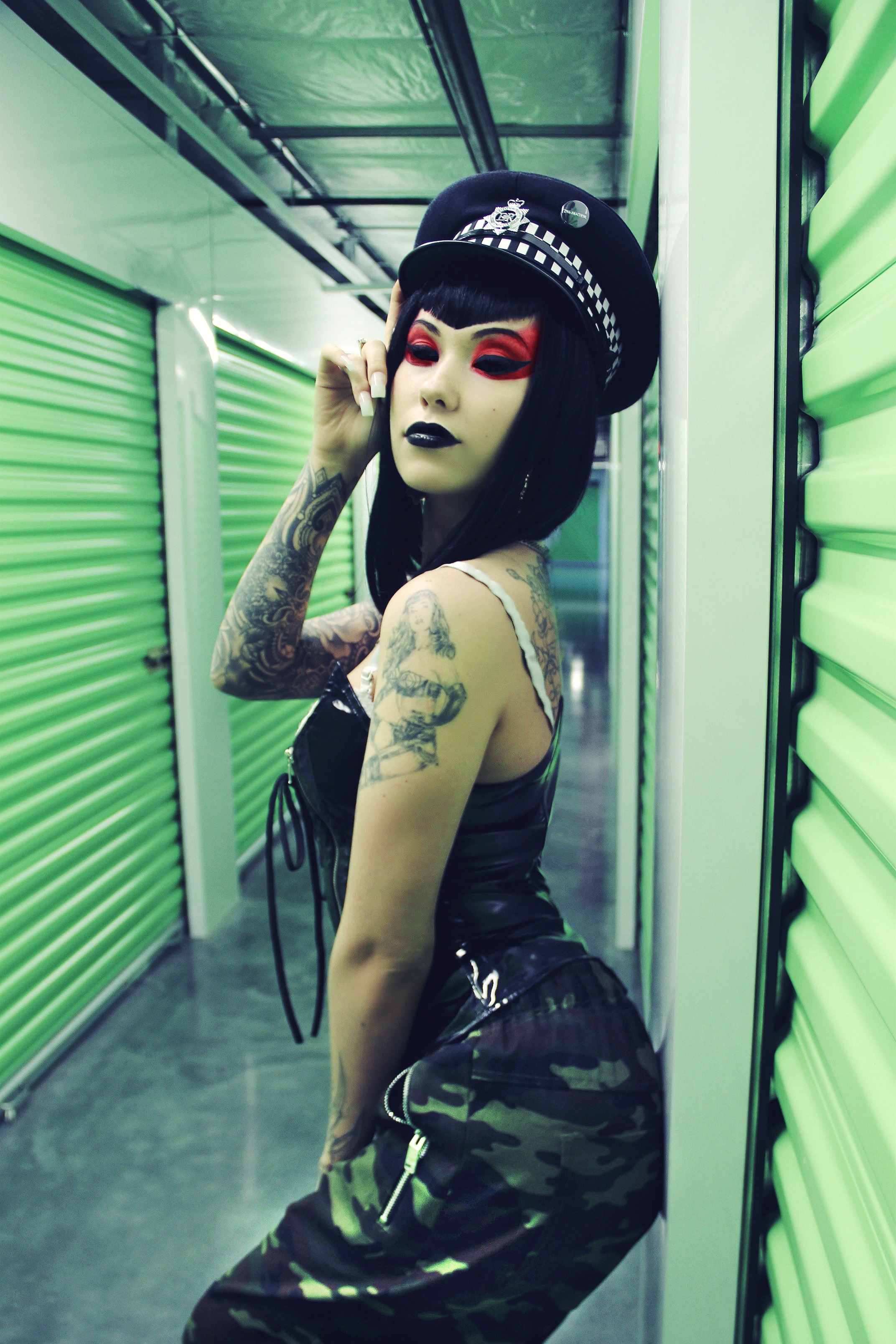 MalLabel: I’d love to hear your thoughts about being a gogo dancer. What do you love about it? What are the challenges? Do you think that incorporating couture design and elevated performance concepts actually takes what you do past the label of ‘gogo’?

MalLabel: Performing onstage can be incredibly empowering. What does empowerment mean to you? Is it a factor in your performance work? Do you think it’s important for people to feel empowered and expressed in their daily lives?

Dia: To me, it’s not about the stage, and I don’t think performing is for everyone. Empowerment is something to be found in everything one does, whether there are people watching, or not. Sometimes I feel more empowered doing an EP illustration cover for PROKO, or gaining art knowledge from Gary Paintin’ – it all honestly depends on the day.

MalLabel: The electronic music industry is notoriously male-dominated. Do you have any advice for women rising up in the scene, whether it’s as a dancer, musician, event producer, etc?

Dia: I wouldn’t say the scene is ‘gender based’ but ‘interest based,’ and if more females are becoming genuinely more interested in the art/music, and not the party, then they should be fine.

MalLabel: Let’s talk about Calypsa. Can you tell me about how it got started? What is the intention/mission at the heart of this crew?

Dia: A couple of years ago, I worked with a photographer who, I discovered, sold racy photos of me to an honorable figure of the entertainment industry behind my back. Besides the fact that I was completely betrayed and traumatized, the situation also compromised life-changing business opportunities for me. After distancing myself from working with outsiders, I decided to focus on Calypsa Agency: an independent creator collective I co-founded with my long time business partner in order to produce, release and preserve project concepts. We have a solid crew of about 10 core people, contracting out as needed. Four of us really nail it down day to day, while a few are completely anonymous and out of the spotlight. We serve as a platform to protect eclectic artists and their brands that they’ve worked tirelessly to sculpt.

MalLabel: What is your vision for the future of Calypsa?

Dia: Calypsa Agency acts as a charity sponsorship first & foremost. We debuted Calypsa by throwing a DrumNBass art supply fundraiser for low income children in Seattle, where myself and my co-founder were both born n’ raised. Our goal has always been about showcasing the multifaceted artists we’re fortunate to collaborate with, while also giving back to our community. This is a new world we live in. Being the ones responsible for making it or breaking it, we as individuals and as a collective push further into the unknown. It’s never been easy, but we’re creating genres, deconstructing stereotypes, and generating our own industries. 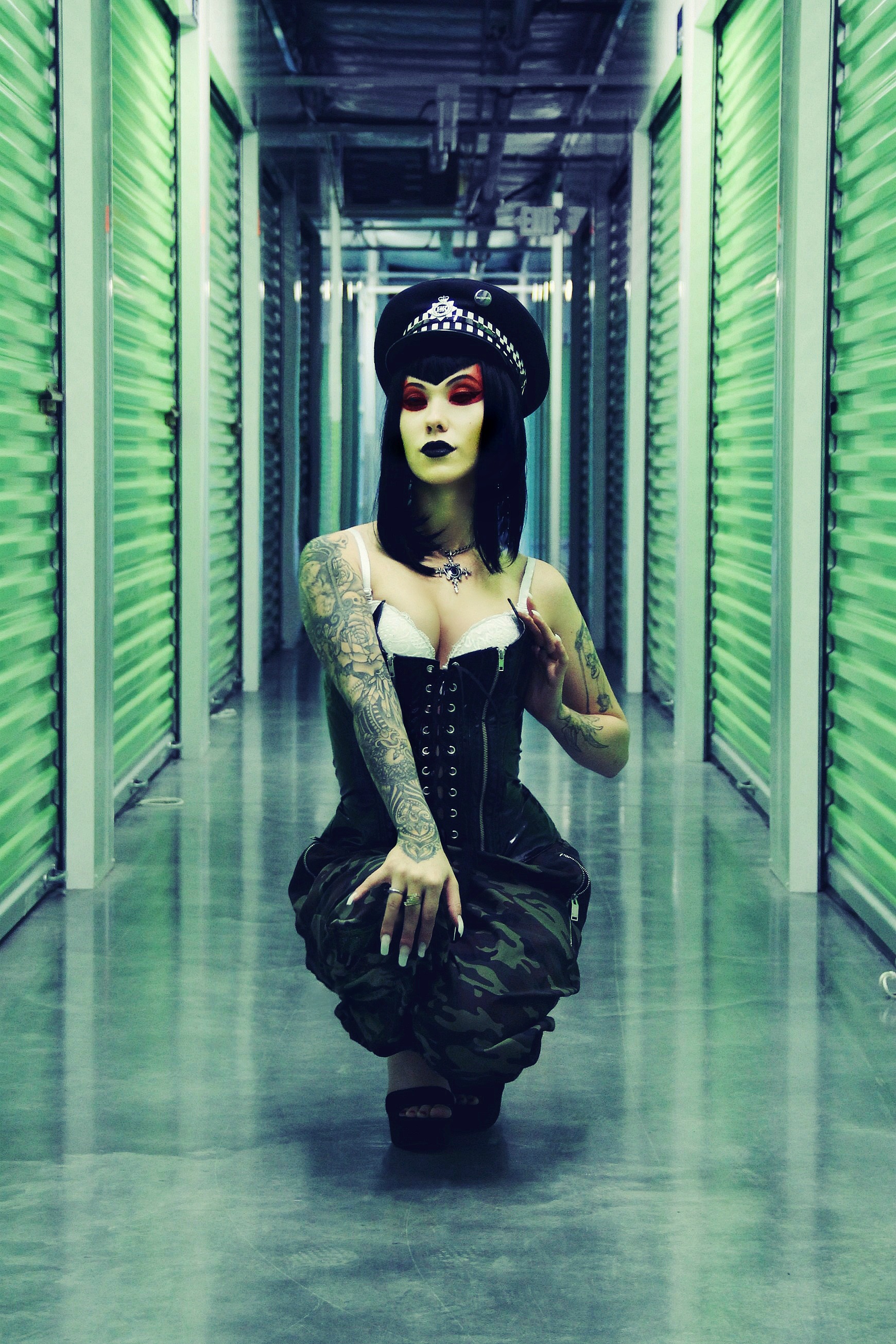 MalLabel: As an art director, you have an inside look and are on the cutting edge of what’s new and interesting in event production. How do see the west coast bass scene evolving over the next few years?

Dia: I imagine UK Dub and D&B will (and already are) strongly influence West Coast as well as U.S. rave culture, generally speaking. Hopefully, the people who started the sound and/or helped pushed it from its origins will get some credit. I also see progression for those ‘newcomers’ producing a classic sound, and a lot more live vocals and MCs coming into the mix. Vice versa, I see quality stage art thriving in Europe and UK eventually, but only if its done right.

Dia: I have a few extra special projects debuting this year – two personal, and two collaborations – showing sides of Calypsa that people have yet to see.